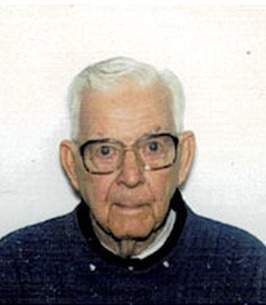 Charles "Chuck" J. Crozier, Jr., 94, died Saturday at Loretto Nursing Home. Chuck was a native of Syracuse, growing up on the West end where he graduated from St. Lucy's. He resided in the Liverpool and North Syracuse areas for 35 years. He was the son of the late Charles J. and Genevieve (Curran) Crozier. He was a true gentleman, with a loving, compassionate heart and a terrific sense of humor.
Chuck was a US Navy veteran, serving during World War II during the Battle of Normandy and earning a Victory Medal. Some of the vessels and stations he served aboard included NAVTRA STA in Sampson, NY, Phib Tra Base in Little Creek, VA, USS LST 133, USS Henrico, USS LST 505, ATB in Fort Pierce, FL, and USN RSS in Syracuse. Chuck retired in 1985 after working as a mail handler for the Taft Road Post Office. Previously he worked for G.E. and Easy Washer. Chuck was a former member of the VFW in Cicero. He was an avid bowler who loved traveling especially taking cruises. Chuck enjoyed trips to the casino and camping with his family. He was a communicant of St. Margaret's Church.
In addition to his parents, Chuck was predeceased by his wife Rose (Podsaid) Crozier, his daughter, Linda Becker, and by his siblings: Elizabeth Blenn, John Crozier, Jean Crozier, Ilene Virgin, and Kathleen Bennett.
He is survived by his daughter: Diane (Louis) Toteda of Liverpool; five grandchildren; eight great grandchildren with one expected in June and many nieces and nephews. We would like to mention his roommate John Fortino and all his friends he made throughout his life’s journey, especially Lou Toscano a former co-worker and dear friend to the end. Special thanks to the staff at Loretto Heritage Apts, Fahey and Cunningham.
Contributions in Chuck's memory may be made to Honor Flight of Syracuse, P.O. Box 591, Syracuse, NY 13209.
Friends may call on Tuesday from 4-7 pm at Krueger Funeral Home, 2619 Brewerton Rd., Mattydale. A Prayer service will begin at the funeral home on Wednesday, 9:30 am followed by a 10 am Mass of Christian Burial at St. Margaret's Church, 203 Roxboro Rd., Mattydale. Burial will be in Veteran's Memorial Cemetery, Syracuse.

To order memorial trees or send flowers to the family in memory of Charles J. "Chuck" Crozier Jr., please visit our flower store.