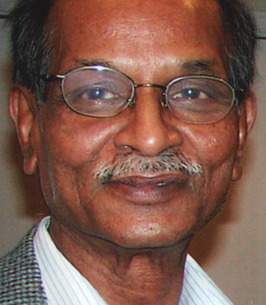 Har G. Dayal, 81, of Liverpool, passed away Friday, November 27, 2020 at Van Duyn Nursing Home. Har was born in Lucknow, India, to the late Rama and Chandresh (Kumari) Dayal. He grew up in India and received his Bachelor’s Degree in Engineering in Germany. Har emigrated to the United States in 1973 and resided in the Syracuse area.

He retired in 2005 after working for nearly 30 years as a Chartered Financial Consultant for the B P Group of Syracuse. Har was an avid chess player competing in many local and regional chess tournaments and even sustained a broken finger during a heated match. He also enjoyed cooking, dining out and was a supporter of the Oneida Indian Nation.

In addition to his parents, Har was predeceased by a sister, Mera, many years ago.

He is survived by his wife and debating partner of 37 years, the former Elizabeth (DeGarmo); his children: Anita (Sam) Convertino, Tania Kohne, and Rene Dayal, all of Liverpool, and Jai (Elizabeth) Dayal of Portland, OR; three sisters: Neelam Saxena and Poonam (Col. Ravindra) Mohan, all of India, and Jyoti (Prem) Srivastava of Montreal; his six grandchildren: Miguel, Antonio, Sylie, Jordan, Alex, and Anik; and by several nieces and nephews and great nieces and nephews.

All Services were private and at the convenience of the family.

To order memorial trees or send flowers to the family in memory of Har G. Dayal, please visit our flower store.