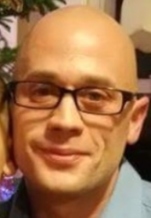 Nicholas V. D'Onofrio, 40, of Brewerton, died Wednesday, March 7th. Nicholas grew up in the Cicero and North Syracuse areas where he graduated from CNS High School in 1996. He attended Cayuga Community College where he majored in Telecommunications.

Nick owned and operated Empire Auto Sales in Syracuse for the past 5 years. He enjoyed competing in the Spartan races as well as other events like snowboarding. Nicholas loved physical fitness, comedy and anything Jamaican. He was up for any activity that included his best friend, his son.

He was predeceased by his paternal grandmother, Dolores D'Onofrio.

Nicholas is survived by his Soul Mate, Shannon Bumbolo of Brewerton; mother, Hilary Carista of Jamesville; his son, Dominic D'Onofrio and his mother, Christa D'Onofrio, both of Clay; a step-son, Mark Gardner of Clay; two siblings: Mark Perun of FL and Sonya Perun of Brewerton; his maternal grandmother, Doreen Carista of Clay; and by several aunts, uncles, nieces and nephews.

In lieu of flowers, contributions may be made to the benefit of Dominic D'Onofrio c/o Empower F.C.U., 1 Member Way, North Syracuse, NY 13212.

Friends may call on Monday from 4-7 pm at Krueger Funeral Home, 2619 Brewerton Rd., Mattydale. A Service of Memories will follow the visitation at 7:00 pm.
To order memorial trees or send flowers to the family in memory of Nicholas D'Onofrio, please visit our flower store.