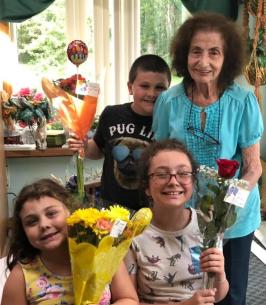 Michelina “Lee” (Patruno) Dracker died Saturday, April 25, 2020 at her home with her family in attendance.
Lee was born July 31, 1932 in Queens, New York to Charles and Josephine (Fasano) Patruno.

After high school graduation, Lee worked as a private secretary at Park & Tilford in Manhattan. On October 16, 1955 she married Albert Dracker at St. Mary’s Help of Christians Church and they made their home in Woodside, Queens. Al and Lee raised their children Robert, Linda, and Michael closely with the Dracker and Patruno cousins. Lee kept busy as a Girl Scout Troop Leader and a dedicated volunteer and Altar Society member of St. Mary’s. A master seamstress, Lee also created many of the costumes for the drama guild at the Church and for the children’s performances. In 1993, Al and Lee relocated to Liverpool to be closer to their children and grandchildren.

Lee was predeceased by her parents, brother Dominic, and sister Grace Alexandro. Her husband Albert died October 12, 2010 and was entombed on their 55th wedding anniversary.

In addition to her children, Lee is survived by many nieces and nephews, three grandchildren Kristy Lee, Ted, and Ryan Hochenberger; and her beloved great-grandchildren, Kaylee, Albert, and Rosalee. Up until recently, Lee attended weekly mass at St. Rose of Lima with her daughter Linda, son-in-law Ted, and great-granddaughter Kaylee. In her final days, Lee’s greatest joy was being surrounded by her great-grandchildren as they played and had sleepovers at “grandma’s house”.

Services were private at Lee’s request. Entombment was alongside Al in the chapel at Our Lady of Peace Mausoleum in Baldwinsville, NY.
To order memorial trees or send flowers to the family in memory of Michelina M. Dracker, please visit our flower store.

Our Lady of Peace Mausoleum