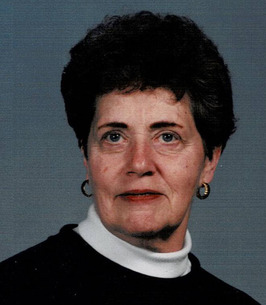 Marion (Feeter) Timm Ford, 89, of Brewerton, died Friday at St. Joseph’s Hospital. Marion was a native of Little Falls, NY, who graduated in 1947 from Little Falls High School, CCBI in 1948 and was the daughter of the late James W. and Hazel (Ransom) Feeter.
Marion retired in 1992 after 26 years as the Secretary for the Building and Zoning Department at the Town of Cicero. Previously, she worked for the Principal of one of the Elementary Schools in the North Syracuse School District for several years during the 1950's and for a few years at Crouse Hinds. Marion was a 60+ year member, Trustee, Treasurer and Past Matron of the former Fort Brewerton Chapter and the Oneida Lake Chapter of the Order of the Eastern Star. She was a life member of the Brewerton Volunteer Fire Department Ladies Auxiliary, and also was the Secretary/ Treasurer of the Brewerton Fire District’s Board of Fire Commissioners for 15 years. She was a member of the Civic Social Club of Syracuse and a member of the Brewerton United Methodist Church where she served on several committees.
Marion was predeceased by her husband, Donald Timm in 1964 and Donald Ford, in 1994, a step-son, Douglas Ford, in 1983, a son-in-law, John Hart, in 2000 and a step-son Edward Ford in 2017.
Marion is survived by two daughters: Karen (Robert) Burwell of Mesa, AZ, and Linda (Art Zacholl) Hart of Brewerton; her step-children: Dawn (Faris) Jackson of Parkton, NC, Diane (Jay) Brandt of Chittenango, Donald (Sydney) Ford, Jr. of CO; and by several grandchildren and great grandchildren.
Contributions in Marion's memory may be made to the Brewerton United Methodist Church, 5395 Orangeport Rd., Brewerton, NY 13029 or to the Brewerton Volunteer Fire Dept., 9625 Brewerton Rd, Brewerton, NY 13029.
Friends may call on Tuesday from 4-7 pm with a Order of the Eastern Star vigil service at 6:45 pm at Krueger Funeral Home, 2619 Brewerton Rd., Mattydale. Funeral Services are Wednesday, 10 am at Brewerton United Methodist Church. Burial will be in Pine Plains Cemetery, Clay.

To order memorial trees or send flowers to the family in memory of Marion K. Ford (Feeter), please visit our flower store.