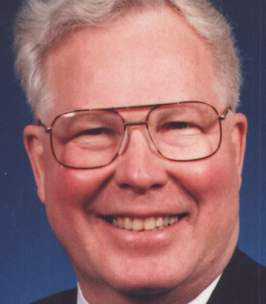 Richard “Dick” W. Granville Jr., 88, of North Syracuse, passed away Wednesday, November 10th at The Nottingham in Jamesville. A native of Brooklyn, Dick grew up in Lynbrook, NY. He was a 1950 graduate of Malverne High School and received two bachelor’s degrees from Lehigh University in Bethlehem, Pennsylvania.

Dick was a US Air Force veteran serving in Dayton, Ohio as Captain in the engineering lab at Wright-Patterson AFB. Dick met his wife while they both worked at GE. He was mentored by the late Dr. William E. Good and retired from GE after 37-1/2 years. Dick was a member of the GE Elfun Society. He always said the best thing he ever did with his life was marry his wife, Deanna “Dee” Prouty Granville. They were married March 30, 1963, at St. Paul's Lutheran Church in Liverpool by Pastor Robert Doxey. Dick enjoyed a family cottage on Lake Ontario for many years.

He was a life member of IEEE and the OSA. Dick enjoyed travelling to see the U. S. as well as the world, railroading all scales, sailing, singing, opera, classical music, cross country skiing, reading non-fiction material and fixing things. He really enjoyed supporting his girls in their musical and athletic endeavors. Dick was a longtime member of Luther Memorial Church where he served as the first Liturgical Deacon, Chairman of Worship & Music Committee, Tenor in Adult Choir and designed the lower stained-glass windows in their sanctuary. Organ was his passion, and he could often solve problems on the spot.

Dick is survived by his wife of 58 years, Dee; their daughters, Nancy Schafer of Liverpool, and Judy McCloskey of Gouverneur; granddaughters: Kristen, Kelly and Allison; and great grandchildren: Taylor, Morgan, Chase and Clay.

In lieu of flowers, contributions can be made to Luther Memorial Church in support of their organ fund, 435 South Main Street, North Syracuse, NY 13212.

Friends may call on Monday from 4:00 -7:00 pm at Krueger Funeral Home, 2619 Brewerton Rd., Mattydale. A Celebration of Life will be held at Luther Memorial Church on Tuesday, 11:00 a.m. with inurnment in the Columbarium. A reception will follow in the social hall.


To order memorial trees or send flowers to the family in memory of Richard W. "Dick" Granville Jr., please visit our flower store.