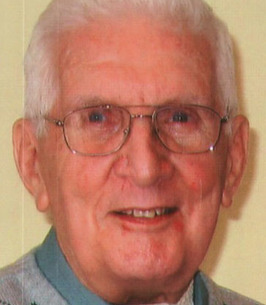 Paul F. McLaughlin, 93, formerly of East Syracuse, passed away on Valentine’s Day to be reunited with his beloved Dorothy. Paul grew up in Mattydale and resided in East Syracuse for 55 years. He was a 1943 graduate of St. John the Baptist Church. He relocated to Liverpool where he has lived since 2009.

Paul was a US Navy veteran serving during World War II aboard the USS Topeka in the Pacific Theatre. He retired in 1986 after 39 years as an underground electrical supervisor for Niagara Mohawk Power Company. Paul volunteered for Meal on Wheels in East Syracuse and was a life member of the American Legion Post #359 in Minoa. He was a member of the East Syracuse Lions Club, as well as a member of Arrowhead Golf Course and scored his first hole-in-one in 1982. Paul instructed RCIA and Religious Education and volunteered with the food pantry at St. Matthews. He was a communicant of Immaculate Heart of Mary Church in Liverpool.

Paul was predeceased by his wife of 61 years, the former Dorothy Schmidt, in 2013, his parents, Daniel J. and Olivia (Devine) McLaughlin, and by his siblings: Margaretta, Daniel, Betty, Harold and Peter.

Contributions in Paul's memory may be made to Mary’s Pantry at Immaculate Heart of Mary, 425 Beechwood Ave, Liverpool, NY 13088. The family wishes to extend special thanks to the staff of the 2nd Floor of Loretto Fahey for their care of Paul during his stay.

Friends may call on Tuesday from 9:00 am – 10:15 am at Krueger Funeral Home, 2619 Brewerton Rd., Mattydale. A Prayer Service will begin at 10:15 am at the funeral home followed by an 11:00 am Mass at Immaculate Heart of Mary Church, Liverpool. Entombment will be at St. Mary’s Mausoleum, Dewitt.

To order memorial trees or send flowers to the family in memory of Paul F. McLaughlin, please visit our flower store.

Followed by an 11:00 am Mass at Immaculate Heart of Mary Church, Liverpool