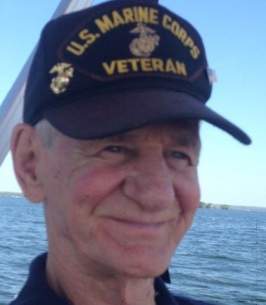 Raymond “Ray” D. Obit, 81, of Mattydale, passed away Saturday, April 11, 2020 at St. Joseph’s Hospital. Ray was the son of the late Peter C.and Letizia (Cometti) Obit and a 1956 graduate of Solvay High School. He resided in Mattydale for the past 40 years.

Ray was a US Marine Corps veteran of the Korean War serving in both Korea and Japan. He retired in 1988 after 15 years as a fork lift operator for Carrier Corporation. He also worked in construction for many years in the Long Island and Syracuse areas. Ray volunteered as a coach for the Saturday morning Basketball League at St. Margaret’s Church and the Mattydale-Hinsdale Little League. He a big John Wayne fan who enjoyed building model airplanes, fishing and spending time with his grandkids. Ray was a longtime communicant of St. Margaret’s Church in Mattydale.

In addition to his parents, Ray was also predeceased by his siblings: Marie, Peter, Theresa, Deena, and Billy.

He leaves behind his wife of 45 years, the former Arlene (Klachaney) of Mattydale; seven children: Alisa, Victoria, Kelly, Kevin, Christopher, Ryan, and Sean; two brothers, sisters and grandchildren including Jacob, Connor and was expecting Nolan any day, and by many nieces and nephews.

Services will be held privately however the Funeral Service will be live streamed on Wednesday at 11:00 am on our Facebook page and our website beneath his obituary. Burial will be in St. Mary's Cemetery, Dewitt.


To order memorial trees or send flowers to the family in memory of Raymond D. Obit, please visit our flower store.