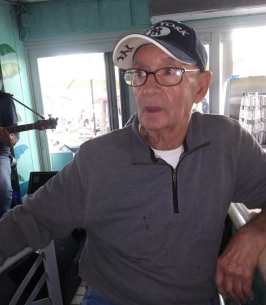 Richard P. Palmer, 84, died peacefully at Elderwood Nursing Home on May 20, 2022, following a stroke he had on May 7th. Richard grew up in Watertown and was a graduate of Watertown High School. He served in the US Air Force and upon his return, he maintained a home in Texas where he built and flew Ultralights for more than 20 years before returning to Syracuse permanently. Richard was a gentle soul, loving and kind. He enjoyed living with his sister, Ann, who was also his caregiver. They lived in Florida this past winter, returning to Syracuse for the summer.

Richard was a sheet metal worker (SMART) Local #58 for over 35 years retiring in 1999. For the past 23 years following his retirement, he enjoyed traveling with his sister, clam bakes and playing cards like pitch with his best friends, Claire, Donna, Jaime, and Kathy. Richard was an avid NY Yankees fan who went as far as to wear his hat to bed. He also enjoyed parties, his cat, Midnight, and his best friend, companion and service dog, Angie.

Richard is survived by two sisters, Irene Charlebois of Alexandria Bay and his baby sister, Ann Romano with whom he resided; and his nephew, Michael Bongo who is the pastor of Living Water Church in Harrisburg, PA. He will be greatly missed by many.

A Celebration of Life will be held on July 13th at 4:00 PM on what would have been his 85th birthday at Home Base Pub in the old Kmart Plaza. Everyone is welcome!

To order memorial trees or send flowers to the family in memory of Richard P. Palmer, please visit our flower store.