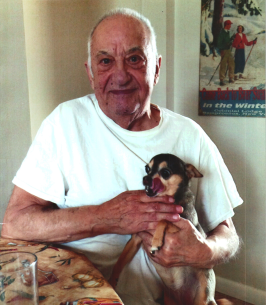 Paul A. Paoletti, 94, of North Syracuse, passed away peacefully on Sunday, October 24th at St. Joseph’s Hospital. Paul was a native of Syracuse and the son of the late Olindo and Josephine (Grillo) Paoletti. He was predeceased by a sister, Viola Paoletti Anthony, a brother, Armand Paoletti, and by his daughter, Kathy Paoletti-DeVaul.

Paul served in the US Navy from 1944-1946. He then opened and operated Paul’s Pizza Crust Factory through the 1970’s. His desire for bigger and better things in life lead him into taking over the Driftwood Restaurant and Bar in 1980. In 1990, Paul married the “love of his life,” Marlene Belge. After a successful 10-year run at The Driftwood, Paul and Marlene purchased and operated The Colonial Lodge in Sempronius. With hard work and dedicated employees, they rapidly grew the business four-fold. Paul and Marlene spent 20 years at “The Lodge” where they met many wonderful people — some who became lifelong friends. In addition to occasional visits to the casino, Paul enjoyed betting on football games and ‘the horses.’ Paul truly loved his family and friends and was always the first one to offer help to anyone needing it. He will be truly missed by everyone who loved him. May you Rest in Peace and win every bet you place in Heaven.

Graveside Services with Military Honors and burial will be held on Wednesday, 1:00 pm, at Veteran's Memorial Cemetery, Syracuse.

To order memorial trees or send flowers to the family in memory of Paul A. Paoletti, please visit our flower store.