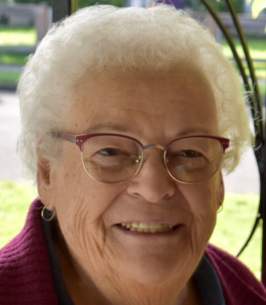 Mona Mae Ranger, 94, of Lyncourt, passed away Sunday, April 10th at Crouse Hospital. Mona was born to the late John and Mona Mae (Wood) Russell and grew up on the North side of Syracuse. She was a 1945 graduate of North High School.

Mona retired in 1989 after 22 years as a claims administrator for Nationwide Insurance in Syracuse. Prior to that, she was a cafeteria worker at Syracuse China. Mona was a 24-year member of the Ilderim Temple #15 Daughters of the Nile and a member of the Lyncourt Volunteer Fire Department Ladies Auxiliary. Mona played the accordion in her youth, sang in perfect pitch, and performed in a bell-ringer choir with Daughters of the Nile. She leaves behind a tremendous artistic legacy. She was the matriarch of two generations of extraordinary artists and creators of music, film, animation, game design and children’s literature.

She was predeceased by her husband of 46 years, Louis Ranger, in 1992 and by her sister, Marian Kline.

Friends may call Thursday from 4:00 -7:00 PM at Krueger Funeral Home, 2619 Brewerton Road, Mattydale, with a Vigil Service by the Daughters of the Nile closing at 7:00 PM. Burial will be in Veteran's Memorial Cemetery, Syracuse.

To order memorial trees or send flowers to the family in memory of Mona Mae Ranger, please visit our flower store.