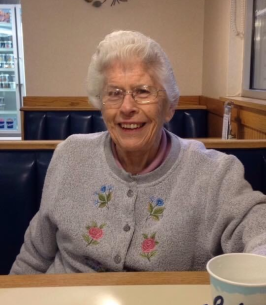 Patricia A. Sabine, 87, of Cicero, passed away Monday, October 26 at Elderwood at Liverpool. Patricia grew up in the City of Syracuse and resided in Cicero since 1958. After graduation, Patricia worked at Bristol Myer Squibb for several years. She was an avid bowler belonging to several area leagues and coached girls’ softball with Cicero Little League. Patricia was formerly a member of Calvary United Methodist Church.

She was predeceased by her husband of 50 years, Miles E. Sabine, in 2008, their daughter, Arlene Sabine-Sweet, in 2002, her father, Patrick MacDonald, and by her mother and step-father, Clara (Brutcher) and Frederick Plumadore.

Contributions in Patricia's memory may be made to Silver Fox Senior Social Club, 22 E. Genesee St., Baldwinsville, NY 13027 or to the Alzheimer’s Association of CNY, 441 W. Kirkpatrick St., Syracuse, NY 13204.

Friends may call on Monday from 4:00 -7:00 PM at Krueger Funeral Home, 2619 Brewerton Rd., Mattydale. Funeral Services are Tuesday, 10:00 AM, at the funeral home with burial following in North Syracuse Cemetery.

To order memorial trees or send flowers to the family in memory of Patricia A. Sabine, please visit our flower store.