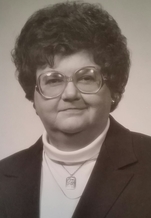 Dr. Jacqueline D. St John, 83, born in Utica, NY and a resident of Omaha for nearly 50 years, passed away at home on March 2, 2018. She valued academic pursuits and was a graduate of Paul Smith’s College, Syracuse University and University of Oklahoma attaining her Doctorate in History.

For 39 years, Dr. St John, was a professor at University of Nebraska Omaha (UNO) where she taught Russian and Soviet History. Additionally, she was a trailblazer in many other ways. In January of 1970, she formed the Omaha Chapter of National Organization for Women (NOW) as well as becoming their first president. While at UNO, Dr. St John initiated one of the first Women’s History courses in 1973. In 1976 as a delegate attending the National Archives in Washington, D.C., Dr. St John helped identify important events in women’s history that influenced how we understand women’s history in the United States today. Later, she became a founding member of the National Women’s Studies Association which was established in 1977.

Along with only 30 other historians in 1977, she was chosen by the National Endowment for the Humanities to attend the First National Women’s Conference in Houston, TX where an estimated 20,000 activists, including 3 First Ladies, joined together to witness as the Women’s Rights Movement gained momentum. She also chaired the Chancellor’s Commission on the Status of Women at UNO, was on the AAUP (American Association of University Professors) committee for Faculty Equal Pay Status at UNO and won the CNY (Central New York) Pioneer Feminist Award. And this year, February 6, 2018, Dr. St John was one of 12 trailblazing Nebraska women recognized at the Durham Museum when they unveiled their exhibit “Women in Omaha: A Biographical Sketch of Persistence Through History” which will remain open until July 29.

Throughout her lifetime, Dr. St John played an active role in education and women’s liberation. Her dedication in the fight for equality has helped ensure a better future for all the women that follow her. She will be missed by so many... family, friends, and academics.

Contributions can be made to: Siena-Francis House, Red Cloud Indian School and Paul Smith’s College.

Friends may call on Friday, March 16, 2018, from 3-4:30 pm at Krueger Funeral Home, 2619 Brewerton Rd, Mattydale, with a Funeral Service following at 4:30 pm.
To order memorial trees or send flowers to the family in memory of Dr. Jacqueline St John, please visit our flower store.