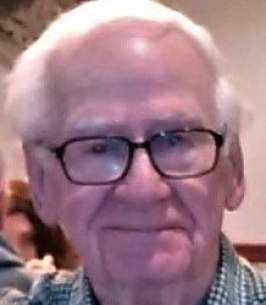 The children of Robert Stanton, of Clay, New York, regret to announce his passing on August 21, 2021. He was a man who moved quietly through the world, spreading kindness, demonstrating respect, and modeling how to live a life of integrity up until the day of his passing at Francis House.

Robert was born on March 4, 1930, at St. Joseph’s Hospital, to the late Earl L. and Julia Arlene Stanton. He was raised in Syracuse in the Elmwood and Wescott St. neighborhoods and graduated from Nottingham High School in 1948. He immediately went to work at General Electric (Electronics Park) as a mail clerk where he met his future wife, Helen VanDerveer. Robert went on to become a machinist, and worked at GE for 39 years, in the “model shop” of the heavy military division. His job involved crafting prototypes from engineers’ blueprints for parts such as sonar devices for the US Navy, and special, one-of-a-kind jobs such as NASA’s Apollo 11 mission.

During the mid-1960’s, Bob built the car wash on Rt 57 at John Glenn Blvd., spending evenings and weekends on its maintenance. That business enabled him to send his children to college and retire early. He and Helen traveled around the US to visit friends and family and attend classic car events. Bob was a member of the Cadillac-LaSalle Club and was a regular at local classic car shows with his black and silver 1940 Cadillac 60 Special. He was also an amateur genealogist and local historian, with a special interest in his 3rd great-uncle, L. Frank Baum, and his Oz books.

Robert was predeceased by his wife, Helen, in 2017, after 66 years of marriage. He is survived by his son, Thomas Stanton of Clay; and his three daughters: Becky Kopper (Craig) of New Hartford, Kathleen Stanton (Richard Lathrop) of Hastings, and Marjorie Stanton (Claudio Bal Roquel) of Halfmoon. He is also survived by five grandchildren: Carly and Kristen Kopper, Chandra Richardson (Jonathan), Jacob and Hannah Smith; and three great-grandchildren: Alysha, Israel, and Giovanna. Robert leaves two nephews, Rick Kunz (Terri LaVergne) of East Syracuse and Steven Kirk (Vicki) of Los Angeles.

Please join us as we honor our father, a man who loved well and was well-loved, on Friday from 5:00- 7:00 pm at Krueger Funeral Home, 2619 Brewerton Rd., Mattydale, with a 7:00 pm funeral service following.
Special thanks to the caring people at Francis House and Hospice of CNY/Finger Lakes. In lieu of flowers, please consider donating to Francis House, 108 Michaels Ave., Syracuse, NY 13208 (https://francishouseny.org) or to Hospice of CNY, 990 7th North St., Liverpool, NY 13088 (https://hospicecny.org.)


To order memorial trees or send flowers to the family in memory of Robert L. Stanton, please visit our flower store.