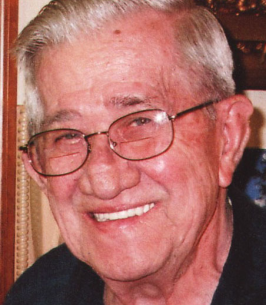 Albert "Al" J. Valasek, 94, longtime resident of Circle Road in North Syracuse, died Tuesday, October 8th at the home of his daughter. Al was born in Brackenridge, PA, and resided in North Syracuse since 1965. He was the son of the late Louis and Sophia (Mayton) Valasak.

Al was a US Army veteran who served in Korea. He retired in 1987 after 24 years in the maintenance department of General Motors Fisher Guide in Syracuse. Prior to that, he worked for 13 years at Allegheny Steel in Brackenridge, PA. Al was a member of the UAW Local #854, the UAW Retiree Club, and a life member of the VFW Post #7290 in North Syracuse. He was a communicant of St. Margaret's Church in Mattydale.

Al was predeceased by his wife of 66 years, the former Mary Ann L. Butler, in 2017, two daughters, Debra Adams in 2012 and Diana Kibbe in 2018, and three sisters, Vicentia Artkowsky, Angela Buco and Mary Malletts.

Friends may call on Sunday from 1:00 - 4:00 pm at Krueger Funeral Home, 2619 Brewerton Rd., Mattydale. Entombment will be in Our Lady of Hope Cemetery, Tarentum, PA.

To order memorial trees or send flowers to the family in memory of Albert J. "Al" Valasek, please visit our flower store.