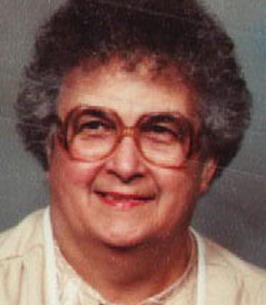 Gloria Wildenauer, 93, formerly of 603 Plymouth Ave. in Mattydale, died Monday, June 29 at Elderwood at Liverpool. Born September 2, 1926 in Watertown, NY to the late Herman and Hazel (Tuff) Ashton, Gloria was a 1945 graduate of Black River High School. While in school, Gloria's parents took in boarders from Pine Camp which is now known as Fort Drum. It was through a couple who stayed with them, that Gloria met her dear husband, Ed. The two connected briefly before Ed was shipped overseas and upon his return, they were married within a few short months.

Gloria worked at General Electric to help pay a few bills until she left to raise their daughter. She returned to G.E. where she worked another 21 years before retiring early in 1986. Gloria and Ed enjoyed traveling; one of their trips was to Germany for several weeks. Gloria was active in church activities at Malden Road UCC in Mattydale and the Salina Civic Seniors. She was an avid Syracuse sports fan including Syracuse football, basketball as well as the Syracuse Chiefs/Mets.

Gloria was predeceased by her husband, Edwin "Ed" Wildenauer, in 1999 and is survived by their daughter: Kathleen Wildenauer of Mattydale.

Friends may call on Wednesday from 4:00 -7:00 pm at Krueger Funeral Home, 2619 Brewerton Rd., Mattydale. Face coverings will be required and CDC & NYS Dept. of Health guidelines will be enforced. Funeral Services will begin Thursay, 10:00 am, at the funeral home and will be live-streamed on our website and Facebook for those unable to attend. Burial will be in White Chapel Memory Gardens, Dewitt.

To order memorial trees or send flowers to the family in memory of Gloria Wildenauer (Ashton), please visit our flower store.